The second stage shows the typical landscape of the northern Black Forest all in one day: rustling coniferous forests, majestic views, marshy hill tops, and deep river valleys. The slow rise from Dobel to Kaltenbronn is graced with numerous views, largely due to the impact from Hurricane Lothar (Christmas 1999). The trail rises over steep, rocky paths past the Latschigfelsen cliffs down into the Murgtal valley and on toward Forbach.
difficult
26.5 km
7:30 h
511 m
907 m
On the edge of town in Dobel, the Westweg dives back into deep coniferous forests. It gently rises over the ridge between Alb and Eyach toward Kaltenbronn. The Westweg remains under the crestline, first passing by the clearing Weithäuslesplatz and then offering up views passing under Schweizerkopf all the way to Hahnenfalzhütte cabin. It reaches the Kaltenbronn plateau at the Langmartskopfhütte cabin. Majestic views down into Murgtal valley accompany the Westweg to Kreuzlehütte cabin, where it crosses the Alte Weinstraße, or Old Wine Road, heading toward the Kaltenbronn inn. At the beginning of the 20th Century, Kaltenbronn was the recovery destination and preferred hunting grounds for Baden’s Grand Duke Friedrich I. Today, you’ll find alpine and cross-country skiers frolicking about in the winter months. Kaltenbach, an animated brook skipping over granite boulders, accompanies the Westweg up to Hohloh-See, a small highmoor lake. A plank bridge leads directly to the tower Hohloh-Turm, which the Black Forest Association erected in 1897 at the highest point of this sweeping 988-meter plateau. After a steep descent, the full altitude distance to the Murgtal valley becomes apparent from atop the Latschigfelsen cliffs. The Murg river has dug itself into a deep, rocky canyon. In Kauersbachtal valley above Gausbach there are characteristic wooden huts for drying hay brought by immigrants from Tyrol. After drying in the huts, farmers would bring the mowed hay down into the valley on sleds during the winter months.The panoramic trail via Gausbach shows the lovely side of the Murgtal valley before this stage ends at the historic wooden bridge in Forbach.

A nice detour will lead you to the lake Wildsee, with an impressive plank walkway over a rampant, still highmoor landscape. The entrance to the plank walkway is found next to the cabin Weißensteinhütte, which can be reached from the Kreuzlehütte cabin via the Helenahütte cabin and further along the Mittelweg. This is where the Wildsee nature conservation area begins. You can reach the restaurant Gasthaus Kaltenbronn directly by following the plank walkway’s extension. 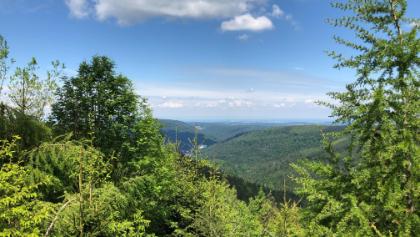 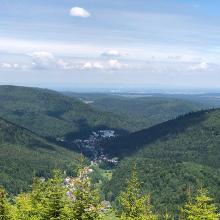 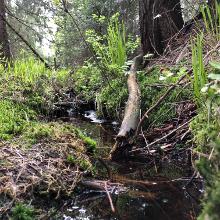 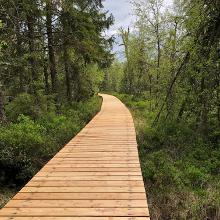