This stage through the Grinden Black Forest takes hikers over the highest peaks in the Northern Black Forest. At an altitude of over 1,000 meters, hikers follow the Black Forest’s main range in a constant up and down. The unique Grinden landscape and the tremendous views down into the Rhine Valley, lying nearly 1,000 meters below, make this stage one of the highlights of the Westweg.
difficult
27.9 km
8:30 h
846 m
792 m
Grinden is the name for the barren, highmoor flats on the crests of the Northern Black Forest. They were formed during the Middle Ages from intensive pasturing. Today, they are covered in nardus, heather, and mountain pine. The Grindens are maintained with targeted clearing and revitalization with livestock ranching. From Unterstmatt, a small trail snakes to the in Gasthaus Ochsenstall, then climbing to the commanding television tower on the Hornisgrinde high plateau, the highest mountain in the Northern Black Forest. The small Bismarckturm tower is found at the highest point of the plateau. At the southern end of the moor, above the lake Mummelsee, the Black Forest Association erected the large tower Hornisgrindeturm, which was reopened for visits in 2005 following the departure of the French military. Behind the mystical Mummelsee lake, the Westweg transverses the faces of Altsteigerkopf, swept barren by the storm Lothar. The cozy cabin Darmstädter Hütte is an inviting location to take a rest. Nearly one kilometer farther, the dark Wildsee lake in the Bannwald forest shines like one of the eyes of the Northern Black Forest. The nature center at Ruhestein explains the history of the Grinden landscape in an easy-to-follow manner. Grinden presents its typical views to those on Schliffkopf (1,055m), which has been ground flat. The unimaginable fury of Storm Lothar while sweeping over the Black Forest on Christmas day 1999 can be appreciated in an impressive manner on the trail Lotharpfad. This small detour climbs over snapped trees and crawls through the underbrush. The fortifications Röschenschanze an der Zuflucht and Alexanderschanze from the 18th Century bear witness to stormy times of an entirely different nature in the Northern Black Forest.

This long, difficult stage is a good candidate for being spread over two days. To do so, hikers descend from lake Mummelsee (3) over the high cliffs to Seebach/Ottenhöfen to thrillingly climb back to the Westweg via Edelfrauengrab (waterfall and ravine) and the alpine ascent at Karlsruher Grat and/or the Allerheiligen cloister ruins and waterfall. The Westweg is reached again at Schliffkopf.

From Alexanderschanze: take bus to Freudenstadt (mai-nov, 20 min, 2x daily; at WE 4x daily); or via Unterstmatt to Baden-Baden (4x daily). 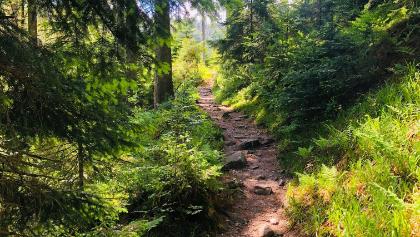 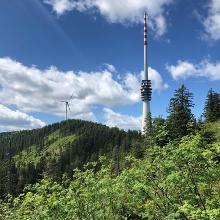 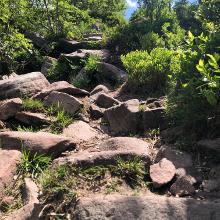 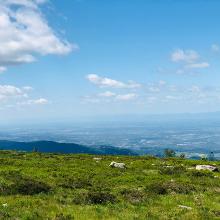