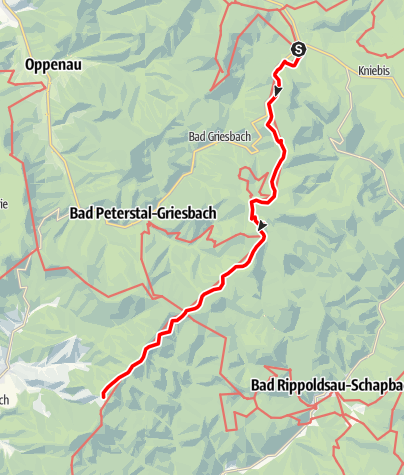 Forest, forest, forest. One long, lonely mountain ridge stretches from Alexanderschanze to Harkhof. The trail has several pearls to offer, such as the lake Glaswaldsee, one of the “blue eyes” of the Northern Black Forest. Steep bowl walls give the lake a mystical feeling. Not far from there, you’ll find Klagstein, whose depths are allegedly unexplored.
moderate
17.1 km
5:00 h
252 m
522 m
Directly at the Alexanderschanze parking lot, the Westweg disappears on a narrow trail into the thicket. Behind the source of the Wolf river, the trail returns to the top edge of the deep valley Renchtal. The broad trails now lead hikers along the edge of the valley. Bauernkopf offers a particularly beautiful view into the Renchtal valley with Bad Griesbach and the Black Forest Mountains wrapping around Mooskopf to turn toward the Rhine. When the thermals are right, paragliders and hang-gliders launch from here. Just a few steps later, the Graseck trail crossing is reached. This is where the detour to Teufelkanzel departs, a cliff formation with roofs and recesses climbing over an alpine cliff ascent. The Westweg remains on height with the ridge, passing by the cabin Hildahütte on a small forest road through a majestically still, untouched landscape to the plateau Lettstädter Höhe (966m). Underneath the broad plateau lies the sublime lake Glaswaldsee, hidden in a bowl. Those for whom the lake view isn’t enough can climb the 200 meters down to its edge. While descending to the deep saddle Freiersbergsattel, there is also a ten-minute detour leading up to mystical Klagstein, rising high over the treetops of the virtually untouched valley Wildschapacher Tal. A splendid place to take a break and enjoy the view! At Littweger Höhe plateau, the Westweg moves to the southern side of the ridge. It won’t leave the deep woods again until the clearance at Harkhöhe. The inn Gasthaus Hark is an ideal place to bring a Black Forest evening to a close gathered around the restaurant’s fireplace.

This short section can be spiced up with three detours. Starting in Graseck, there’s an alpine variant over Teufelskanzel to Lettstädter Höhe plateau. A descent to the enchanted lake Glaswaldsee and a stop on the dashing Klagstein with its tremendous views are practically must-sees for Westweg hikers.

From Harkhof: next train station in Oberharmersbach-Riersbach (ca. 5 km from the Westweg). From there by train (16 min) to Biberach train station. 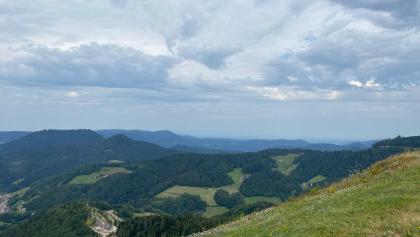 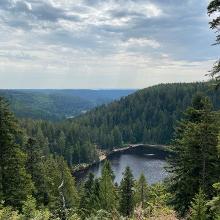 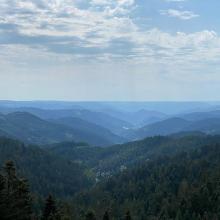 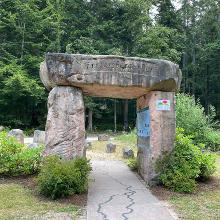