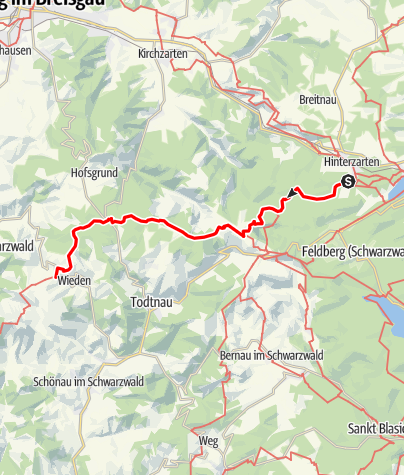 The king of the Westweg’s stages is without a doubt crossing Feldberg from east to west. At the top on the windswept peak, the highest point in Germany north of the Alps, Westweg hikers are not the only ones who feel like conquerors of the mountain. Some would certainly like to spend a fair bit of time here enjoying the grandiose view if they didn’t have the long journey to Wiedener Eck ahead of them.
difficult
26.5 km
8:30 h
882 m
745 m
From Oberzarten, the Westweg initially follows along the romantic valley Zartenbachtal. There are signs indicating a brief detour to beautiful Mathisleweiher, a former timber pond. Slowly descending, the “Am Feldberg” clearing is reached along individual forest farms. At Rufenholzplatz, the trail begins to climb more sharply. The wide trail gradually turns into an alpine ascent through a rustic pine forest. On the back of the monstrous walls of the bowl Feldseekar, the forest occasionally grants views of the green, shining lake Feldsee far below. Past the forest ‘s border, the trail climbs through Grüble into the wide saddle between Seebuck on the left and the top of Feldberg on the right. A good twenty minutes later, the “climax” of the Black Forest is reached. The outlook island on the 1,495-meter Feldberg marks the highest point in Germany outside of the Alps. Accordingly, it provides a 360-degree panorama when the weather is nice: in the north and east, the peaks of the Black Forest fade into the horizon; in the west the Vosges mountains appear to sway over the Rhine area; however, the true spectacle is found in the broad Alpine panorama to the south. The Westweg continues as a narrow trail with steep steps, climbing down to the cabin St. Wilhelmer Hütte; from there, it follows the back side of the mountain to connect to Belchen. The barren and long ridge on Stübenwasen (1,386m) leaves quite an impression with its majestic Alp panorama. Behind the pass Notschrei, the trail ascends once again circling Trubelsmattkopf to reach Wiedener Eck passing over free meadows.

In the bowl Feldseekar, behind the view onto Feldsee lake, the cliff ascent on the path Emil-Thoma-Weg branches off and leads right through the middle of the bowl wall between Seebuck and Feldsee, at times passing over narrow hard rock to reach the estate Feldberger Hof. A brief visit to “Haus der Natur” is exceptionally informative. There is also a gondola that hikers can ride up to Seebuck, which saves significant amounts of both climbing and time.

From Wiedener Eck: take bus to Münstertal, then take train or bus to Bad Krozingen and from there with the train to Freiburg (ca 1 hr. 15 min, 4x daily); take bus to Utzenfeld via Wieden. Then take bus to Zell and finally take train to Basel (ca. 2 hr., 20 min, 2-3x daily). 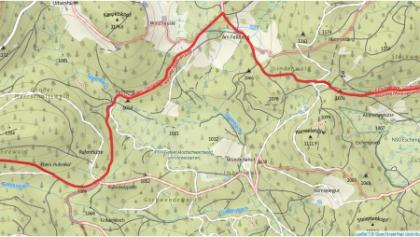 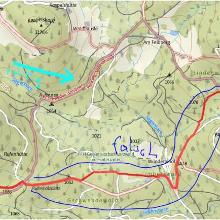 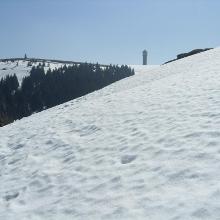